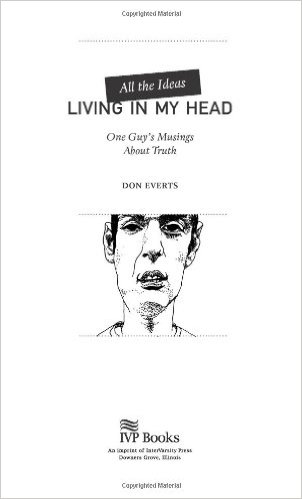 Buy this on Amazon

As someone who has been in ministry on college campuses since 1994 through InterVarsity Christian Fellowship, Don Everts is no stranger to ideas. College campuses are breeding grounds for dialogue, debate, idea sharing, and general philosophizing. It wasn’t until having an email conversation about the nature of the authority of scripture that Everts really began thinking about his thinking. All the Ideas Living in My Head: One Guy’s Musings About Truth is a tour through Everts’ mind and how he approaches thinking about thinking.

Though the book is subtitled as containing musings about truth, the focus of the topic is not necessarily about truth, but ideas. Everts explains that the way he approaches his thought does not fit into the traditional modern and postmodern categories. He describes modernism as understanding ideas as objective facts and postmodernism approaching ideas as subjective experiences. For Everts, the best way to understand his thinking is by thinking of his ideas as people living in his head. His ideas take on their own personality, new ideas must dialogue with current residents in his head, and ideas eventually develop a seniority based on a wide range of factors.

I found myself nodding along as Everts described what he understood to be happening to the differing ideas that found their way into his head. The book is a short and quick read at only seventy-two pages. The books takes a popular tone that uses plain language to describe some fairly provocative ideas. At times I found myself hearing echoes of Donald Miller in Everts’ style.

Though the book is already brief, it could stand a bit more tightening. Thoughts in the book seemed to be repeated often as they are approached from a few different angles. For those in youth ministry, Everts offers what seems to me to be an acceptable way of talking to our students about the way we think, although his ideas are not explicitly Christian. As he states in the beginning of the book, they are simply his thoughts about the nature of his thinking. If you are interested in a book that offers Christian thoughts on certain topics, you might try one of the other three books in this series. The other books appear to take a closer look at three of the ideas that “live” in his head: the Bible, evil and hell, and tolerance. Though I haven’t read those books yet, I would expect that they would exhibit an explicitly Christian way of thinking about those topics.

Don Everts is an engaging writer, but the repetitive nature of this particular topic seemed to limit the display of his talent. The book offers a fun, easy read on the way in which Everts’ mind functions, which is probably similar to many of his readers. However, there is nothing groundbreaking or thought provoking that would make this a must-read for those in youth ministry. If the topic interests you, you will likely enjoy the book.