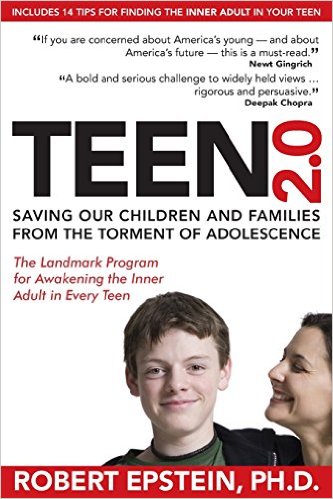 A book written by a psychologist that challenges your assumptions about adolescence.

Teen 2.0, like all books that I try to reserve for my small group of “Best Youth Ministry Books,” is a game-changer. On reading this post by Mark Ostreicher, I decided it was time to pick up this book by psychologist Dr. Robert Epstein. The premise of the book is pretty simple: adolescence, defined as a period of turmoil (and that word is particularly important to the definition) between childhood and adulthood, is an unnecessary social construct and not a required developmental or biological life stage. He goes even further, and spends 400 pages arguing, to say that not only is adolescence not necessary, but it is actually harmful. For those, like me, in youth ministry who have devoted lives to ministry with people in this very stage of turmoil, that’s a pretty big assertion.

Assuming we accept his thesis, how did we get here? How did we create a life stage called adolescence? In Chapter 2 Epstein gives his account, saying that adolescence as we know it today did not exist until modern industrialization, between 1880 and 1920. Child labor laws and public education systems began to isolate teens from adults, causing the aforementioned turmoil that is common during adolescence. When teens started acting out, the reaction was further laws, further restrictions, and further separation between teens and adults. We have lived in a society with this vicious cycle ever since. Epstein says that for most of human history people have gotten married and started working to support themselves soon after puberty. We have come to the point in America when the median age of first marriage is 27.7 for males and 26.0 for females (p. 30). By treating teens like children (Epstein calls this infantilization), we are creating this stage of turmoil. In one of the most provocative sections of the book a study is given which says that modern teenagers have less significantly freedom than prison inmates or soldiers (p. 11), a recipe for rebellion and turmoil.

Each chapter of the book seems to debunk myth after myth, mostly based on competency tests:

In sum, we are not utilizing the capabilities of our most intelligent, strongest, most creative, most responsible citizens by limiting teens to a life where they are required to go to less-than-ideal schools, are not allowed to be significantly employed, and cannot legally make any decisions for themselves. We are not treating teens according to their potential, but are restricting them in a way that is harmful.

If you are thinking, like I did, about all the research devoted to adolescence and all the studies that talk about the development particularities in adolescence, Epstein provides a fairly broad rebuttal to that body of evidence: almost every single study out there shows correlation, not causation (195 ff). Of particular interest in adolescent research is brain development, and Epstein spends a few pages dissecting a fairly typical teen research study. He concludes with these words:

I’ve only touched on a few of the assertions and implications that Epstein gives in his book. There are many more worth pondering, not the least of them dealing with our education system (if you want a chapter-by-chapter review and discussion, you can go to Joel Mayward’s blog). I need to do a bit more research on my part before jumping in and assenting to everything Epstein says, but he does give some weighty arguments that challenge almost every popular preconception our culture has of teenagers. If you are someone who works with teens, you simply must read this book. We must. There may be a bounty of untapped potential just waiting to bust forth.